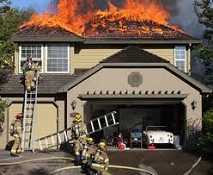 A homeowner expects that his or her insurance company will be there when there is a fire at the home. Fire is one of the most destructive forces in nature and can quickly cause severe damage to a home and property. Often, a homeowner barely has a chance to escape the fire with their family before the home is completely destroyed. The last thing on anyone’s mind at that time is the payment of a fire insurance claim. After all, that is the reason that people have home owner’s insurance.

Unfortunately, even a fire claim is not a sure thing when it comes to dealing with an insurance company. The company will often look for a number of reasons to deny a fire claim. These types of claims are often the most devastating and therefore the most expensive for the insurance company to pay. Fire insurance claims can be denied for a variety of reasons including accusations of arson or otherwise blaming the homeowner for the fire that destroyed their home. If the company does not deny the claim outright, they will frequently delay the claim for a very long time claiming that they cannot determine the value of the assets that were destroyed until a homeowner produces proof of the value of the items that were destroyed. Often times everything is destroyed in a fire, including the proof of the assets value such as receipts and work orders.

Mold and Water Damage to Home
A homeowner may think that when their home is damaged by water, the damage will be pretty obvious. After all, when a pipe bursts or a drain backs up, there will be a large amount of water on the floor and walls. However, water damage is actually one of the trickier kinds of home damage and therefore one of the most common types of claims denied by homeowner’s insurance companies.

Water can often go unnoticed behind walls, in the attic and in less frequently observed sections of the home. Furthermore, water that goes undetected can cause mold. Mold can lead to serious and expensive problems that are far worse than the water damage itself. A simple leak can result in a very large amount of damage.

For that reason, insurance companies will often attempt to deny the claim. A common reason for denial is to suggest that the water damage was caused from something other than what actually caused it. For example, an insurance company will often suggest that the water damage was caused by flooding or a natural disaster when it was really caused by rain because, homeowner’s policies do not cover certain natural disasters but they do cover rain damage. Because water damage is so difficult to determine, an insurance company may attempt to deny the claim. If a homeowner knows that his or her water damage is covered by their policy and that company is trying to deny the claim, it is important to contact an attorney that has experience in dealing with water loss claims. An experienced attorney is familiar with the common tricks used by the insurance company and will be able to present a claim or lawsuit in a way that drastically improves the chances of compensation.

Wind and Hail Damage
During a wind or hail storm, nature will be throwing a lot of different powerful forces at a home. A significant storm could produce strong winds, rain, lightening and hail all at the same time. Often times, it is difficult to determine which particular act of nature caused certain damage to the home. For example, rain can cause a home to flood causing significant damage, or wind can cause damage allowing the rain to get in. A homeowner’s insurance policy can be extremely complicated. The exact force of nature that caused the exact specific damage can mean the difference between a claim being paid and a claim being denied.

Damage to a Foundation or Structure
Damage to the structure of a home can be the most nerve-wracking type of property damage. A homeowner does not know if their house is safe to live in or if the damage will continue to get worse as each day passes. Unfortunately, damage to the structure or foundation of a home is also among the most difficult damage to identify and determine the cause and solution.

Property Damage to a House of Worship
Unfortunately, the risk of damage to a church or other place of worship is greater than many other types of buildings. Many people depend on the house of worship and come and go throughout the day and night. Natural disasters such as wind, rain and man made damage such as fire, theft and vandalism are common occurrences at churches around the nation. For that reason, most churches carry some form of insurance in an effort to protect their expensive building from damage.

Churches are not in the business of making money. However, that is no reason that an insurance company should take the claim of a church any less seriously than the claim of a retail store or office building. Unfortunately, insurance companies will often look for any excuse to avoid paying for the expensive repairs of a house of worship.

When an insurance company refuses to reimburse a congregation for the loss of its place of worship, it often leaves that congregation with ability to continue its services. This creates a tragic loss to the community that should be fixed as soon as possible. An experienced law firm knows how to negotiate with the insurance companies to remedy the problem quickly. In the event that an insurance company continues to refuse to fulfill its obligations, an experienced law firm knows how to successfully navigate the court system to enforce the rights of the congregation.

Business Interruption Insurance Claims
Business owners depend on the steady operation of their business. The ability to turn a profit is sometimes a very difficult task. Business owners cannot worry about whether a disaster will force them to shut their doors for a period of time and bring all operations to a halt. For that reason, most business owners purchase interruption insurance to ensure that they are able to make payroll, pay bills, relocate and cover expenses in the event that their company is forced to close due to a disaster.

The damage to a business is more than the cost of the physical repair. Business interruption insurance is necessary for the very survival of the business itself. Therefore, when an insurance company delays in paying a claim, it can destroy the business that is depending on them. If a business owner has any reason to believe that an insurance company is trying to delay or deny their claim, it is important to contact an experienced attorney right away. This is an emergency situation that can quickly drive a business into bankruptcy. It is important to consult with a firm that can get emergency legal help as well calculate the actual loss suffered by the business.

Property Valuations and Homeowner’s Claims
A homeowner knows better than anyone else what his or her property is worth. They know the time, expense and effort that were taken to improve their home. Homeowners often take up additional expenses and splurge to create a kitchen or bathroom that they can show off. The cost of the tile, the expense of the appliances and the additional labor needed to get everything right are some of the details that the homeowner knows very well.